The first day of September and the stand-alone Victoria plum was alive with activity. I've had so many sweet, delicious plums, for so many months, that I was happily leaving those I couldn't eat for the birds. However, it was the insects today that were making a meal of them: my plum tree was a wild menagerie of sweet-loving invertebrates. My very own bees rubbed shoulders with a variety of wasps, including a very camera-shy vespa crabro, and some lovely Red Admiral butterflies.

The Victoria plums really were very delicious and cropped with far more plums than I could have eaten or preserved. I have two Victoria plum trees, one growing as a fan and one as a stand-alone bush, and both were prolific this year; I think they like the extremely heavy clay we are sitting on. I also have an Opal plum, fan-trained, but I found the fruits not nearly as sweet and a bit watery. I think perhaps this variety might need a little bit more sun than what it gets. It is supposed to crop before the Victoria but my fan-trained Victoria had finished before the Opal had even started to ripen.

There's two other fan-trained plums, Marjorie's Seedling on Pixie root stock and Oulin's Golden Gage. I did not get any fruit off the former. The latter, however, was absolutely wonderful. It was the first to crop and the little sun-warmed, golden-green fruits were the most delicious thing I have tasted from the garden yet. My only problem was that the vespa crabro really liked them as well and would eat through a few whole fruit per day, completely ignoring my attempts to shoo it away. It makes such a determined noise as it zips around that it was me, rather than the hornet, that I think I spent more time in flight than I did in fight.

I was a little worried that the fruit trees were attracting so many sweet-toothed insects and that they might easily stray towards my hive, especially since I am still feeding my bees. However, I decided to adopt the philosphy that they were not likely to venture into the hive with so many treats available on the trees. Let's hope I'm right. 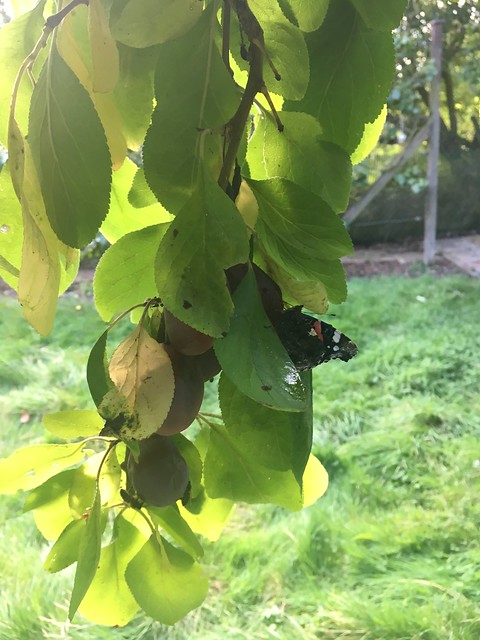 I can't hide my disappointment at my local nurseries.

I've been a bit worried about my bees lately. I fed them for a few weeks when I received them in June but both of my bee buddies were concerned that they had stored a lot of the sugar syrup and were running out of room for the brood so they both recommended that I stopped feeding them.